W and I leave for our trek to Provincetown, Mass., early tomorrow morning.

She told me that she would get me to love road trips.

“Probably not,” I replied.

My voice got all high like Anthony Crispino, the secondhand news correspondent played by Bobby Moynihan on Saturday Night Live. 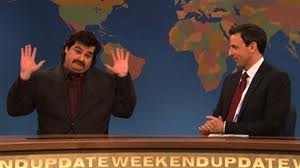 I went out today to buy some new clothes for our trip.

A few pairs of cargo shorts and a some new white socks.

I needed underwear, too.  I usually buy Hanes or Fruit of the Loom hi-cuts.  Whatever’s on sale.  I’m not that picky.  I scan the packs for the least girly combination possible.  I can usually find a pack of six with only a pair or two covered in flowers or pastel polka dots.

Today, however, I came up empty handed.  I couldn’t find an acceptable pack of women’s underwear to save my life.  So, I did what any self-respecting butch would do.  I went to the men’s department.

I’d already given some thought to switching over from panties to briefs. I picked up a pack of men’s underwear at Target a few months ago.  I thought that I’d wait until I lost some weight to wear them though.  “I will look totally buff and butch then,” I told myself.

But a lot of stuff happened between now and then.  Like nachos.  And ice cream.  And kids home from school for the summer.

So, I bit the bullet today.  I bought matching socks and underwear.  I figured P-Town would be a good place to romp around in boy briefs.  Besides, if we got mauled by sea creatures on our whale-watching tour, at least I’d be wearing new underwear.  My mother would be mortified. 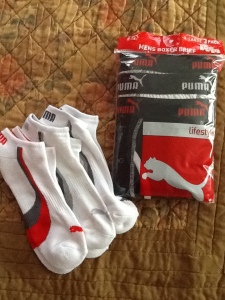 Puma socks and men’s boxer briefs.  I will be like a cougar.  A big butch cougar. 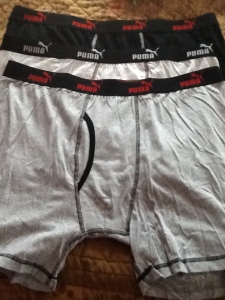 I don’t remember the last time I was so excited about a clothing purchase.

Oh, and I made one more purchase.  A T-shirt to remind myself to relax and enjoy.

And to let W know that I’m trying.  That I’ll be leaving here Thursday morning with an open mind and an open heart.  That I really am excited to be spending time alone with her, even though my stoic disposition always leaves her guessing. 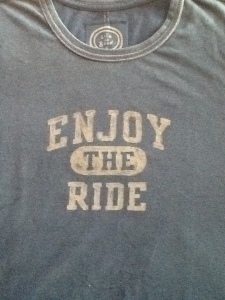 Good advice for road trips.  And for life.  That and “Pack Lots of Snacks” and “Don’t Forget the Indigo Girls CDs.”

Books I’m taking: A Return to Love by Marianne Williamson, Is Everyone Hanging Out Without Me? by Mindy Kaling

Today when I was folding laundry, I turned on the TV and skimmed the channels for something to watch.  I ended up finding an episode of Sex in the City. 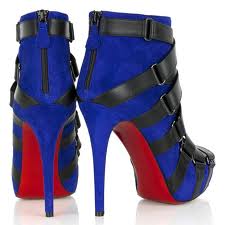 I shouldn’t even know what these are

As I listened to Carrie Bradshaw’s voice-over on men and dating, it dawned on me that watching Sex in the City is a very un-butch thing to do.  It’s more of a gay man’s show, considering the shoes and the clothes and the boyfriends.  Of course, there’s Cynthia Nixon, and I think Samantha flirts with being a lesbian in one episode, but that can’t counter all of the penises and Louboutins.  Really, I shouldn’t even know what Louboutins are.

Anyway, the show got me thinking about the un-butch things that this butch does.

Now, of course, we’re treading into the land of stereotypes here.  But I’ve been quite open about the fact that I’m a stereotypical butch lesbian.  See blog name.  Also, I’m wearing a thermal henley and a sweatshirt that W bought for me from the men’s department of Target as I type this post.  And, I have been looking for my Black & Decker drill all damn day, which I haven’t been able to locate for the life of me.

So, in no particular order, here are some random counter-butch things about me:

She’s always telling me to post about my nails.  “Why don’t you tell everyone about your nails?” she says.

The nails are the last thing left from the feminine life and times of middle age butch.  Back in the day, I used to rock long, red nails, perfectly manicured and painted.  When I see my college friend’s husband, he still comments on those nails from days gone by.  They were that stunning.

Me and George, hand models

People used to tell me that I should be a hand model, which makes me the George Costanza of lesbians.

Kramer: Really?  Let me look at them.

George: You can look at them, but do NOT touch them

Kramer: Let’s see … oh, those are nice.  You know, I’ve never noticed this before.  They’re smooth … creamy … delicate, yet masculine.

I’ve shed the nail polish, but I still keep my nails on the long side.  I like to think of them as a vestigial appendage.  Like a stumpy tail of sorts.

2. I giggle.  Only around W, though.  She loves to make me giggle.  Sometimes at night with the sheets pulled up tight, we giggle like a couple of schoolgirls at a slumber party.

3. I scream when I see small rodents.  Like when there’s a bat (or winged rodent) flying around the room.  Those bastards will get tangled in even the shortest, dykiest haircut.  Or, when there’s a mouse trapped in the bathtub.  See here.

4. I sport a pair of athletic socks with a pink Nike swoosh.  I rock these socks when I’m in a really good mood.  Sometimes I’ll accessorize a very masculine outfit with these bad boys.  Real butches wear pink.

They always make me think of that cat from Mutts.  So cute.

5.  I have flowered underwear.  I buy packs of Fruit of the Loom or Hanes high-cut briefs from Target.  They usually come in a packs of six or eight and at least one pair is flowered.  Always.  I wish they were decorated with little sock monkeys or mud flap girls but they aren’t.  I’ve looked.  Maybe I should start buying men’s drawers.

The flowered undies usually sit at the bottom of my underwear drawer.  Until I’m out of plain underwear or I’m in a really bad mood.  Here’s my train of thought: How can my day get any worse?  I’m already wearing flowered underpants.

What about you?  What’s the un-butchest thing you do?