W and I are watching Wynonna Earp.

In one episode at the end of season one, there’s a pair of sinister twins.

“Sinister twins are my secret fantasy?” I tell W. 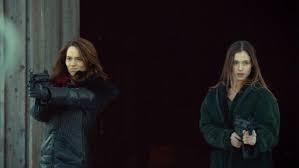 And then before we know it, the Earp homestead is under attack, and Wynonna and her sister Willa are busting out of the barn with guns ablazing to save the day.

W and I cheer and then we both make a heh, heh, heh noise, which translates to good lord that was hot.

And then I start thinking about the overall hotness of girls and guns. What is it about that combo?

Put the two together and it’s a totally different ballgame.

Xena, I miss you.

I should clarify. It doesn’t need to a be a gun. Some other bad ass weapon will work like a sword, for example (see Xena: Warrior Princess).

What is it about bad ass women?

Do we want them? Or do we want be them?

Are we living vicariously through them? Pretending that we, too, have the power to eliminate our enemies or correct an injustice with one shot from Peacemaker?

I can’t help but notice that most of the bad guys are, well, guys.

Is every TV bad guy a stand-in for men who put us in boxes and tell us to smile? Men who are boys and will always be boys. Men who got but never gave.

Does every bad guy represent sexism or the patriarchy or the system? The boys club or the locker room? Those things that hold us down and push us back and tell us we’re not good enough, never were and never will be.

Is that why we get a charge out of seeing them taken down by a woman after all and in such dramatic fashion?

Or are girls with guns simply hot?