This is the post that has me stuck.  This is the reason I haven’t posted in so long.  I’ve been working on this post for weeks.  I keep writing and editing, and I still can’t find the right words.  I’m angry.  I’m annoyed.  Although I can’t exactly put my finger on what’s bothering me so much. Remember the electronic memory game Simon from the 1970’s?  All of my buttons have been pushed, and I’m lit up red, green, blue and yellow.  This post isn’t perfect, but I need to let go so I can move forward.

I mean, same-sex marriage is now legal in Pennsylvania.  W and I took the plunge and got married in October.  Just like straight couples do.

I feel welcome in our small town.  I am warmly greeted at the veterinarian’s office, at the checkout line in the grocery store, at Kohl’s, at the local pizza place and ice cream shop.  Me, a girl, with too-short hair and too-long sideburns.

I never notice anyone giving me the cold shoulder.  No one ever shrieks or flees when I walk into a place of business, even when I’m having a bad hair day.  Just kidding! A butch never has a bad hair day.

It’s been years since anyone has shouted “faggot” or “dyke” in my direction from the safety of their moving cars.

I had been lulled into a sense safety and comfort much like a baby in one of those automated swings.  Silly, butch.

And then someone questioned the value of something I had written because of two reasons: I am a woman and a lesbian.  I will call this person Angel of the Bottomless Pit (not real name).

For a few seconds I felt smaller than usual, and my words felt lighter than usual.  And then I got mad.

It was a sneak attack.  I never saw it coming.

Now, I’m on a mission to get my book published.

I often think of the C.S. Lewis quote : “We read to know we are not alone.”

There is tremendous power in seeing your reflection in the pages of someone else’s book.

I remember  feeling all emotional but not really crying reading Ivan Coyote and Rae Spoon’s book Gender Failure earlier this year.  I never knew people wrote books for people like me.

I have committed to making a big push to find an agent or a publishing house to pick up my memoir. (If you know of anyone who might be interested, please let me know.)  If I don’t get any takers, I’ll self-publish in 2015.

I am now certain of the value of my story.

Of course, it is a story about being gay, being lesbian, being butch.  But there’s more.

It is a book for anyone who has struggled with identity, shame, fear.  It is a book about finding oneself and shining brighter than you ever thought possible.  Bright as a gold button caught in the rays of the afternoon sun.

At it’s core, it’s a tale about being human.

I thought everyone would be able to relate to that.

I was mowing the grass yesterday in my front yard when I saw a neighbor pull up in his white Lincoln Continental.  My son hightailed it into the house with a quick “bye.”

This neighbor lives down the street — maybe 5 or 6 houses down — but always parks near our house.  I have no idea why.

He was most likely coming home from work, and I thought the loudness from the lawnmower would deter him from stopping and chatting.  It didn’t.

He walked right up to our fence and started talking.  Out of politeness, I stopped the lawnmower.

He was talking about baseball.  About his Orioles and an upcoming series with the Jays.  Something about the Yankees.  We both despise the Yankees.

He mumbles a lot and is difficult to understand.  I usually respond with broad statements.  “Yep.”  “I dunno.”  “We’ll see.”  “You never know.”

These cover a lot of ground.

He’s an older man in his late 60s or maybe early 70s.  Trim with a white beard and soft features.  He reminds me of Uncle Jesse from the Dukes of Hazard except he’s skinnier and never wears denim overalls.  He refers to himself and his friends as “good ol’ boys.”

He first approached me right after we moved into our house.  He saw our Phillies flag and struck up a conversation about baseball.  We talked starting pitching, the Red Birds and the standings in the AL East.  I strained to maintain my end of the muddled conversation.

That’s when he dropped the K-bomb.  Or, the KKK-bomb, to be exact.I didn’t know what to say.  Didn’t he know he was talking to a lesbian?  I’m pretty easy to spot.  I’m what you call a 100 footer.  “A girl/woman that you can tell is a lesbian from 100 feet away,” the Urban Dictionary says.

I probably should have indicated my disgust with anything that has to do with the Ku Klux Klan or racism or discrimination in general.

But, I didn’t.  I thought I would just steer clear.

And, that’s what I did.  I dodged him as best as I could, circling the block if I saw him walking up the street or waiting to leave the house if he was parking his car nearby.

I started becoming aware of the neighbor’s tics and tocks as he traveled up and down our street.  Sometimes he has these outbursts — profanity laced tirades — that can be heard from inside our home.  On occasion, there are shouting matches that take place in front of his house.  He yells that they’ll be sorry — all of them.  He talks and gestures to invisible companions in an agitated manner.  Fists raised and wagging.

I soon realized that our neighbor has a mental illness.

I see his soft, rounded features and immediately think that he has had a hard life.  That life was so hard and brutal that it beat its fists against him until any sharp spots or angles were forcefully transformed into curves and half circles.

I don’t know if this is true, but it’s what I believe.

As the years have passed, the neighbor still strikes up conversations with me.  And, I try my best to listen and respond appropriately.  I don’t avoid him as much as I used to.  He has never been aggressive, rude or threatening in my presence.

We mostly talk baseball. He knows the standings in each division to the half game.  He asks if I know who Johnnie B. Baker is.  (Answer: Dusty Baker, former Dodgers great and current manager of the Cincinnati Reds.)  He tells me his Orioles can’t let up with the play-offs on the horizon.  “Yep,” I say.

Sometimes he tells me about his “gals.”

He thought his newly acquired Lincoln would be a chick magnet of sorts.  All long and fancy and shiny and white.  A status symbol from a bygone era.

He tells me about the gal that he has his eye on.  Someone that he knew from the old days.  And, another who waited on him last week.  I imagine someone like Flo with tall hair serving him hotcakes with a side of wise cracks and a snap of pink bubblegum.  That’s the kind of woman he would like.  Someone with some spark and spunk and a twinkle in her eye, even though they would get into heated, throw-the-plate-at-the-floor fights nearly every day of the week. 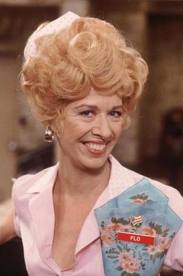 I often wonder if he realizes that I am a woman in men’s cargo shorts and Phillies T-shirts.  Sometimes I wait for him to punch me on the shoulder and give me a wink.  “You know how them gals can be,” I imagine him saying.

But it always comes back to baseball.  His beloved Orioles are surging, 3.5 games behind the dreaded Yankees.  My Phillies are in the tank.  “Maybe next year,” I tell him.  “You never know,” I add.

I go in the house and one of the kids asks who I was talking to.