I’ve been in a funk lately.

Not the good kind of funk like Prince’s “Housequake” or Rick James’ “Superfreak.”

But the other kind.

Let me put it another way. My mood has been Orange Is the New Black, Season 5, which everyone knows is the darkest of all six seasons.

I haven’t been blogging or doing any other kind of writing. I haven’t been doing much at all, besides watching cooking shows. For some reason, I find them comforting. 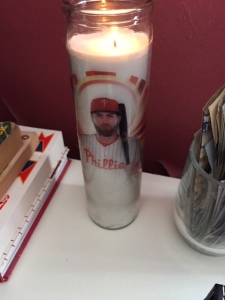 The Phillies had their home opener yesterday.

I lit a candle like I do every year and prayed to the baseball gods.

This year, I prayed to Saint Bryce, the saint of the long ball and beautiful hair. W bought me this overpriced Bryce Harper candle the last time we were in the city.

I asked Number 3 to help power the Phillies to a winning season. And also asked for some hair-styling tips. I mean have you seen the magnificent head of hair on this guy?

It is truly glorious, said the envious butch. 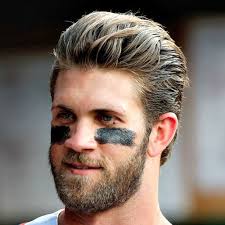 What do Bryce Harper’s hair and opening day have in common? Both are magical.

Opening day is a fresh start. With 162 games in front of you, anything is possible.

As I watched the candle burn and stared into Bryce’s intense steel blue eyes, I felt a little lighter and a little brighter. 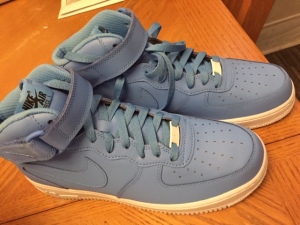 P.S. I ordered these custom Nike Air Force 1s to match my baby blue Phillies cap with the heather gray brim. They are so beautiful that I cry each time I take them out of the box and hold them.

Are you a baseball fan? How did your team fare on opening day?

5 responses to “Praying to Saint Bryce”

Valet of the Ultra-Vixens

Philogyny for fun and no profit