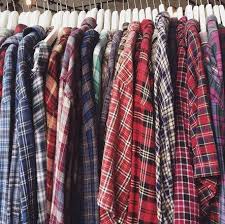 This could be my closet

At dinner last week, one of the kids asks me if I have more flannel shirts like the one I had given him to wear in his school’s production of Annie Get Your Gun last year.

“It’s for a friend,” he says, “whose parents think flannel shirts are too masculine.”

“I don’t know,” I say. “If his parents don’t want him wearing flannel shirts …”

“Look, I don’t agree with it, but he’s not my kid,” I say. “I can’t be some underground supplier of flannel for your friends.”

He nods his head.

Underground supplier of flannel, I say to myself. I sit a little taller in my chair.

“I’ll take a look at my flannel shirts in the next week or so,” I say. “I probably have some I don’t want. I’ll give them to you. They’ll be your flannel shirts. Whatever you do with them, that’s your business. I certainly can’t be responsible for what you do with your clothing.”

I feel a little bit like a hero. Passing on my used flannel shirts to kids who need them the most.

The intersecting horizontal and vertical stripes forming hundreds of tiny crosses as they cover a new body.

14 responses to “The Flannel Underground”