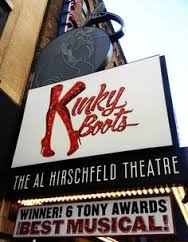 As they say in Kinky Boots …

Ladies, gentlemen and those who have yet to make up their minds …

W and I have returned from our jaunt to the Big Apple.  Barely.  We almost died on more than one occasion riding in NYC taxi cabs.  Or “yellow cars of death,” as I like to call them.

Highlights include some really good pizza, Ellen’s Stardust Diner where the waiters and waitresses serve burgers and Cokes and belt out Broadway tunes, and the glory that is the Broadway musical Kinky Boots.  W and I had third row seats, so we were right at boot level.

If you don’t know the Kinky Boots story, it’s about a drag queen who saves a shoe factory on the verge of bankruptcy.  But more than that, it’s a gender-bender of a tale about accepting others and loving yourself.  And drag queens.

So, with that, I’d thought I’d share the six-step program from Kinky Boots: