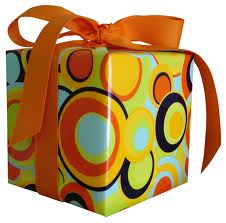 W and I celebrate our anniversary on Monday.  Last year on October 1, we had a commitment ceremony in which we exchanged vows in front of friends and family.  We had all the bells and whistles of a real, honest-to-goodness wedding.  Unfortunately, same-sex marriage isn’t legal where we live.

Anyway, I need an anniversary gift for Monday.  I usually have something tucked away for special occasions.  A bracelet that W tried on in some artsy store, a book that she casually mentioned or some knick-knack that she pointed out in a catalog.

I’m sneaky like that.  Be careful of the consumer goods that you name drop in front of me.  They just might show up under the Christmas tree or in your Easter basket.  Ped Eggs, Kinoki foot pads or one of those brownie pans that make every brownie an edge piece.  I’m all over it.

For this occasion, I’ve got nothing.  I remembered that anniversary number one is paper, so I thought I’d go with that.  Being a writer and all.

Maybe a coupon book.  To go with the other coupon books that I’ve given W through the years.  Why that woman has not redeemed all of her certificates for FREE SEX and MAKE OUT SESSION is beyond me.  A virtual fortune in tacky sex-related coupons pissed away.

Or, personalized stationery.  To go with the Jenga-like pile of note cards stacked on the bookshelf by my desk.

Dental dams?  Is that considered paper?

I laser in on a poem.  Nothing says “love” like a really great poem.  Right?

The only problem is that this wordsmith totally sucks at writing poems.

I’ve penned about five or six poems for W during the course of our relationship.  A couple of them are pretty good, but most of them are pedestrian.

I go online and find a love poem generator.  This is what it spits out:

“Your skin glows like the peach, blossoms moist as the rose in the purest hope of spring.

My heart follows your flute voice and leaps like a monkey at the whisper of your name.”

Not that bad, actually.  But weird and sort of plagiaristic.  And wouldn’t a “flute voice” be shrill and annoying?  Who says “flute voice” anyway?  Ooh, I love it when you talk to me in that flute voice.

W will read this post and say, “Baby, you don’t need to get me anything.  I just want you.”

This butch would look ridiculous in a red satin bow, so there goes that idea.

Maybe me naked wearing a bow tie, but I don’t know how to tie one.  I have to learn how to do that someday.

Of course, a gift isn’t essential.  But what kind of butch shows up empty handed on an anniversary?  Especially anniversary #1?  A thoughtless one, if you ask me.  I pride myself on spoiling W when I can.

Maybe coupons aren’t such a bad idea after all.

Be my PILLOW QUEEN FOR ONE NIGHT.

LET ME TALK DIRTY TO YOU.  In my flute voice.

This entry was posted in Being Butch, Gay & Lesbian, Relationships and tagged anniversary, butch, gay, gifts, lesbian. Bookmark the permalink.